To test if a cancer drug has an effect, drug treated cells are compared with untreated cells. Traditionally this is done by comparing population histo­grams, using a statistical method known as the Kolmogorov-Smirnov test. Population histograms are created at a specific point in time. But, as Holo­Monitor® can monitor cells minute by minute over days it can also create very detailed time series plots of each cell, similar to stock market graphs.

At the recent scientific conference on Engineering and Physical Sciences in Oncology organized by the American Association for Cancer Research (AACR), scientists from Northeastern University presented a big data analysis method based on a modified Kolmogorov-Smirnov test.

The scientists have used the newly developed method to compare time series data of drug treated cells with untreated cells. The work was spear­headed by Ed Luther who manages the Holographic Imaging Cytometry Program of Excellence at Northeastern University. 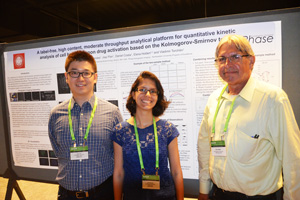 “By non-invasively observing cells over time, HoloMonitor can quantify the effect of a drug using only a few cells – which is important in developing personalized cancer treatment strategies”

Flow cytometry is still the mainstream cell analysis method. One of the key strengths of flow cytometry is its ability to acquire data for population histo­grams from a large number of cells.

Flow cytometry is however invasive, making it impossible to acquire data from the same cell over time. By non-invasively observing cells over time, the Northeastern scientists show that HoloMonitor can quantify the effect of a drug using only a few cells – which is important in developing personalized cancer treatment strategies.

Since the Holographic Imaging Cytometry Program of Excellence was estab­lished at Northeastern University in late 2014, the progress has been remarkable: