In the October issue of Molecular Cancer Therapeutics the American Association of Cancer Research (AACR) highlights the novel nano­medicine against ovarian cancer developed by scientists from the Center for Pharma­ceutical Bio­tech­nology and Nano­medicine at North­eastern University. PHI maintains the Holographic Imaging Cytometry Program of Excellence at the University since 2014. For more information about the article see.

Ovarian cancer is the deadliest gynecologic malignancy in developed countries. It has a 5-year survival rate of approximately 40% and accounts for 6% of all cancer-related deaths in women in the United States. A combination chemotherapy prolongs the lives of patients. However, the disease recurs in 80% of cases because the tumor cells develop drug resistance.

Using HoloMonitor® M4 the researchers at the University of Chicago and Northeastern University have shown that the new treatment prevents recurring tumor growth by stopping drug resistant cells from dividing. 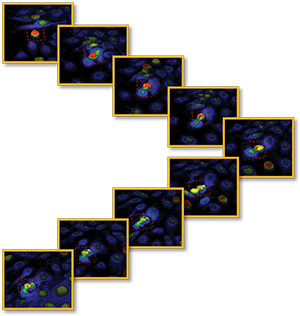 A HoloMonitor M4 time-lapse sequence of a treated drug resistant ovarian cancer cell which starts to divide but fail.

“In total, our customers and partners have published over 60 scientific pub­lica­tions where the company’s technology has been used. The publications, which are reviewed by inde­pen­dent scientists, show the scientific value of our HoloMonitor technology and thereby its market potential in cancer research and other bioscience applications”, said CEO Peter Egelberg.

A list of the scientific publications can be found here.