Melanoma, the most dangerous form of skin cancer, is increasing. In the US, melanoma is one of the most common cancers among young adults. However, if the disease is caught early, then it can be cured. A research team, led by Dr Robert Judson-Torres, apply single cell tracking when studying melanoma at an early stage.

Find out how Dr Robert Judson-Torres and his research team work with single cell tracking and analysis, when studying skin cancer at an early stage. Judson-Torres is a Principal Investigator at the Department of Dermatology at UCSF, leading a research group with the interest to understand human melanoma and its progression in vitro, and to drive development in prevention, diagnosis and treatment. 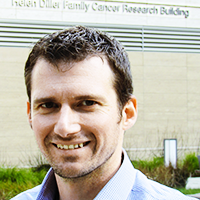 Tracking cells pulled out from the skin

Many studies in the field of melanoma focus on cell lines derived from patients that already have advanced disease. These cells are not representative of the early stages of the disease.

“We had to establish a model using the cell type from which melanoma is derived, so we are using human melanocytes. Then we used CRISPR to introduce the mutations most commonly associated with melanoma in order to engineer the early stages of the disease”, Dr. Judson-Torres says.

The research team receives skin removed in surgeries. This gives only a few cells to work with. Dr Judson-Torres explains that they don’t work with cells that have been kept in culture for a long time; they want to keep everything as close as possible to the cell type pulled out from the skin.

“When putting human melanocytes on glass or plastic, the morphology is complex and beautiful, but after a few weeks in the lab the complexity is gone”, Dr. Judson-Torres says.

We are able to get a lot of information out of these very few cells in the limited time we have to work with them. I’m not aware of any other equipment that would allow that.

How is HoloMonitor and cell tracking helping you?

“We are able to visualize the primary cells we derive from the skin immediately without labeling the cells and without undergoing any selection process. We can also watch the cells without disturbing them. We can see which behaviors and morphologies are dynamic. We are able to get a lot of information out of these very few cells in the limited time we have to work with them. I’m not aware of any other equipment that would allow that”, Dr. Judson-Torres explains.

When studying melanoma cells from a patient there is a bias problem as only the cells that successfully became melanoma are studied, and if a cell line is being analyzed, the cells that successfully grow and behave well in vitro are studied. There is a risk of missing what happens to all other cells – many of which harbor the exact same genetic mutations. The research group’s goal is to understand human melanoma by engineering the progression in vitro, piece-by-piece, and to drive discoveries in prevention, diagnostics, and treatment.

With help from clinical data, a team of melanoma research groups at UCSF have traced genetic mutations during each stage of melanoma progression. From this, Robert Judson-Torres’s group went back to primary melanocytes and added similar mutations at different times to analyze cell behavior, molecular changes, and determined which cells do progress.

“One of the very fundamental questions we started with was: If you have 1,000 identical melanocyte cells and each one receives  exactly the same oncogenetic mutation, does every cell transform or does only a small percentage of the cells transform, and what happens to the rest of them?”

Using HoloMonitor M4 to track individual cells among the primary melanocytes pulled out from patients, Dr Judson-Torres’s research group was able to characterize not only how different the melanocytes are but also if they belong to distinct groups with similar characteristics. When looking at the percentage of cells that do transform, the research team then introduces other conditions or environmental stimuli, like small molecules, to see if the rate then increases or decreases.

“If other conditions or compounds influence the probability of transformation, it would not be just early diagnosis we might be able to help with, but also prevention.”

In your publication Quantification of Mammalian Tumor Cell State Plasticity with Digital Holographic Cytometry you were using HoloMonitor when looking at cell behavior.

“We are interested in looking at the point in tumor progression where cancer cells begin to metastasize. There is a concept called cell state plasticity, which is basically a term for a cell losing enough of its regulation. If the cell’s plasticity has increased, you have a cell that will more easily overcome selective pressures. This is very difficult to study. We wanted to visualize cells, monitor their different behaviors and morphologies to determine the of fluctuation between these characteristics. With HoloMonitor M4 we could study how individual cells behaved and we could perform time lapse studies. HoloMonitor allow us to conduct these experiments investigating cell state kinetics; it allows us to monitor plasticity with single cell resolution.”

“We used HoloMonitor M4 digital holographic cytometry method with the HoloMonitor Cell Tracking software, and Wound Healing Assay, and compared it with transwell migration and invasion assays. The relative cell motilities were well correlated, and the HoloMonitor M4 yielded reproducible results that well-correlated with standard assays. Importantly, with the M4, we could conduct the experiments using just a few human melanoma cells in standard culture conditions.”

What do you think about HoloMonitor’s future?

“It is a strong tool for routine assays and tissues, and provides higher level analyses with single cell tracking. We gain a more complete appreciation of how heterogeneous primary cell cultures are, and how much information we lose by using population averages. I believe on of the unique strengths that HoloMonitor will provide in the future is the ability to observe very rare cell states and cell state transitions in heterogeneous populations,” Dr. Judson-Torres concludes.

University of California, San Francisco (UCSF) and PHI have jointly created a regional Holographic Imaging Cytometry Center of Excellence, headed by Dr. Judson-Torres and located at the UCSF Helen Diller Family Comprehensive Cancer Center. The Center’s activities focus on bringing the benefits of holographic cytometry and machine-learning to the UCSF research community, by providing education and technical support.